Ken Stern, former CEO of National Public Radio,  writes: “When you are liberal, and everyone else around you is as well, it is easy to fall into groupthink on what stories are important, what sources are legitimate and what the narrative of the day will be.”

I discovered this for myself when I first served as student minister for the First Universalist Church in Pittsfield, Maine. It was a congregation that boasted genuine ideological diversity; there were Republicans in the pews, wonderful people who were not shy about speaking up. 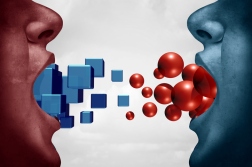 This was my first ministry, my very first experience of preaching not just here and there but Sunday after Sunday. The first of these was the Sunday after the terrorist attacks of 9/11.

There was nothing to say and everything to say…and the world would not get less complex nor the issues less vexed and potentially divisive over the next two years.

I shall always be deeply grateful that instead of “preaching to the choir,” I had to preach to the actual people, present before me, who could not be presumed to share my assumptions.  Indeed, here was where I began to realize that I had assumptions—that my “think” was often just groupthink.

In brief, the openly-declared, confident presence of Republicans in my congregation made me more mindful and, I believe,  a much, much better UU minister and chaplain.

In the subtitle of Ken Stern’s new book, he says he “learned to love the Right.” –KB

Most reporters and editors are liberal — a now-dated Pew Research Center poll found that liberals outnumber conservatives in the media by some 5 to 1, and that comports with my own anecdotal